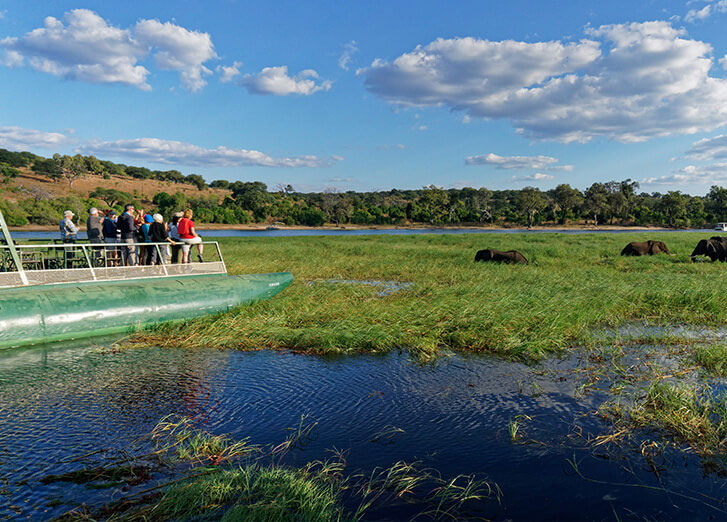 The fascinating Chobe River is a segment of an intricate river system that flows through south-central Africa. Beginning as the Cuando River, it runs along the northern border of Botswana into the Linyati Swamp, changing then to the Linyati River. Further east, it becomes the Chobe River before merging with the Zambezi River. This interlocking network of waterways even flows in reverse at times.

Cruise through the twisting, wide body of water before stopping at Chobe National Park, where you'll experience some of the best game viewing via private boat or open game-drive vehicles. Chobe National Park is home to one of the most substantial populations of wildlife in Africa, with the highest concentration of elephants on the entire continent and more than 450 species of birds. Be on the lookout for crocodiles and hippos in their natural habitat as you travel by boat.

Chobe cruises are typically part of a longer land itinerary, with sailings generally spending four nights on the river. Opportunities for game drives and other sightseeing options are available during the land portion, including visits to spectacular Victoria Falls, where the river spills over the falls' fault line.

All the day-to-day travel details are handled by experienced tour directors who accompany you during the entire trip. Cruises are easy to budget, too, as so much is included in one price that you pay up front, including riverboat and lodge accommodations, most meals and activities on board and on land.