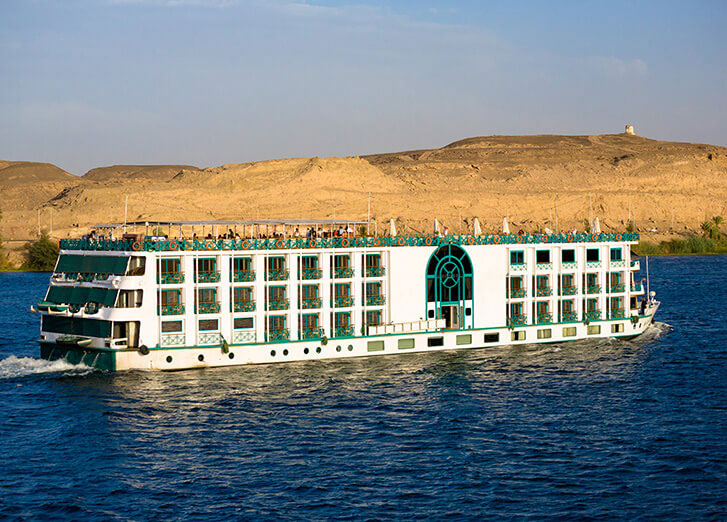 The Nile is the world's longest river, traveling more than 4,000 miles through northeastern Africa and emptying into the Mediterranean Sea at Egypt's coast. Cruises on the Nile are frequently incorporated into longer land-based trips that usually travel round-trip from Cairo. Along the way, guests see some of the country's most treasured antiquities.

Upstream from Cairo, on the Nile River, the ancient route through Egypt, is FAYOUM, the garden of Egypt, in one of the richest and most beautiful of all the provinces of Egypt. Surrounded on three sides by the Libyan desert, it is separated from it on the north by salty Lake Karoun, the Sacred Lake or Lake Moeris of the ancients, made by the Pharaohs an aristocratic residential area. The uneven ground here, unique in the country, gives rise to some beautiful scenery, passing through great palm groves and orchards of orange trees and mandarin trees. The lake is popular with fishermen for its excellent soles and enormous sea mullets. South of the lake is the Pyramid of Ill ahun, tomb of Senusert III. From this pyramid came the beautiful jewelry of the princesses, in particular the royal diadem, speaking highly of the skill and taste of the ancient goldsmiths. A beautiful and picturesque excursion through date forests and beside waterfalls and gardens takes you to the Pyramid of Hawara, tomb of Amenemhat, founder of the Twelfth Dynasty, who began an ambitious project for turning Lake Moeris into a vast reservoir. To the south of the pyramid stretches the funerary temple known as the Labyrinth, without doubt the most important and most complicated of discovered funerary temples, made up of twelve covered courtyards, in two stories of 1,500 rooms each, forming an infinity of winding turns and false exits. The tombs of these rulers of the Middle Kingdom are scattered along the valley of the Nile, with the most celebrated those of the pr inces at Beni Hassan, renowned for their rich paintings. King Amenhotep IV, who later called himself Akhenaton, of the Eighteenth Dynasty (1567-1320 B.C.), built a new capital on the site of Tell el-Amarna. Here are the remains of his palaces and temples, as well as the houses, villas and tombs of his courtiers.

At LUXOR and KARNAK, two villages further up the Nile, was the ancient city of Thebes, of which Homer said "that only the grains of sand outnumbered the wealth enclosed within Thebes and its hundred gates." The wealth of the Sudan and the Asiatic countries poured into Thebes, and the Court of Pharaoh was the meeting place of the envoys of all the then known world, who flocked to the capital of the Empire to offer their homage to the King, present their tribute and express their loyalty to Egypt. These mighty monuments speak highly of the great power, skill and engineering ability of the Egyptians. On the right bank of the mighty river is the Luxor Temple, the Karnak Temple and the "Avenue of the Sphinxes," connecting the two temples. This fabulous, two and one-half mile long avenue, the greatest thoroughfare of ancient Thebes, built by King Amenhotep III, was of overwhelming grandeur, lined by marble temples, palaces, obelisks encased in gleaming metal and on either side, rows of ram-headed sphinxes, each with a statue of the Pharaoh between its paws. On the opposite bank are the sepulchral temples of Thotmes at Deir-el-Bahari, one of the most remarkable monuments of Egyptian architecture; of Set I and Rameses II at Qurna and of Rameses III at Medinet Hahn. The Great Hypostyle Hall at Karnak and the stupendous Memnon statues are also representative of the majesty and daring of ancient Egypt.

Walk through the Luxor Temple, for example, which was built about 3,000 years ago and is especially beautiful when lighted at night. Philae Temple was carefully dismantled during the construction of the Aswan Dam and moved to a nearby island. Four giant stone statues of Ramses II flank the temple at Abu Simbel.

The Valley of the Kings was the final resting place of Egyptian pharaohs, including young king Tutankhamun. The Valley of the Kings contain the royal sepulchres of tombs of the New Kingdom ( 1567-1090 B. C.), veritable subterranean mansions, or a series of corridors and chambers hewn in the rock, some of which go more than hundreds of feet deep, the innermost of which contains the granite sarcophagus with the golden coffin of the ruler, all decorated with splendid bas-reliefs illustrating the funerary beliefs prevailing during that epoch. Some four hundred private tombs, believed to belong to the nobility, are terraced on the desert hill at Qurna.

Halfway between Luxor and Aswan is EDFU. Here is the Temple of Horus, from the Ptolemaic Period (332-30 B. C.), with its mighty pylon towers, one of the best preserved in all Egypt. Taking 180 years to complete, it is one of their real masterpieces, reflecting both the traditional Pharaonic architecture and a moderation of Greek lines. The last stop on the Nile is at ASWAN, famous for its modem and ancient architecture, as well as being popular as a health resort because of its magnificent dry, warm climate. The modem masterpiece is the splendid, mile and a half long Aswan Dam, which has added over a million and a half acres of land to cultivation. It is in fact this dam which was responsible for the submerging of the beautiful island of Philae. The Temple of Isis built there dates from the Pharaonic era down through the Ptolemaic and Roman periods. When the sluice gates are opened between July and October and the water recedes, you may still visit this mysterious and magic home of the "Lady of Enchantment," but in winter only the pylons of the temples are to be seen in the middle of a vast expanse of water. From the famous Aswan granite quarries many of the most noted obelisks and statues of ancient Egypt originated, and these quarries ai-e still being actively worked in much the same manner as they were thousands of years ago.