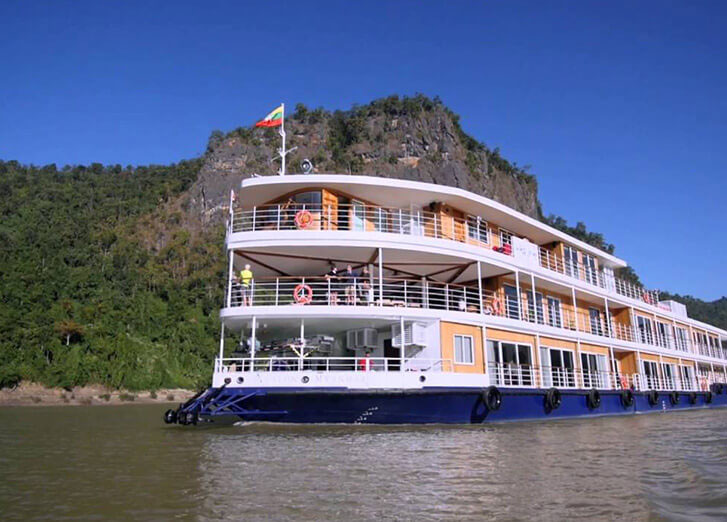 Flowing from north to south for 1,300 miles through Myanmar (or Burma), the Irrawaddy River (Ayeyarwady River) is often referred to as the "The Road to Mandalay" after a famous Rudyard Kipling poem. This enchanting river reveals exotic landscapes and historic treasures.

You'll see rural villages, colorful markets, elegant monasteries and diverse cities that have developed along the river banks over centuries. These cruises are typically part of longer land itineraries that include hotel stays and sightseeing in landmark cities in Myanmar and Thailand.

Mandalay, considered the center of Burmese culture and Buddhist learning, was the country's last royal capital. Here you might visit Shwenandaw Monastery, Mahamuni Pagoda and Mandalay Hill -- a 790-foot rise dotted with pagodas and religious images that offers unforgettable panoramas of the city and river.

The 11th-century Burmese capital of Bagan is ripe for exploration with more than 2,000 temples, pagodas, monasteries and stupas (Buddhist memorials) covering its plains. In Yangon, you can walk among colonial-era architecture on Strand Road and explore historic Buddhist temples such as Shwedagon Pagoda and Sule Pagoda, each thought to be over 2,500 years old. Kyaukhtatgyi Pagoda, which houses a 180-foot reclining Buddha, is another popular stop here.

The Irrawaddy has long served as an economic and spiritual lifeline for the Burmese, and you'll gain a deeper appreciation of Myanmar's culture, history and people as guides in each destination share their expert knowledge and point out significant sights. Cruises are easy to budget, too, as your riverboat accommodations, hotel stays, many meals and activities ashore are included in one price that you pay up front.