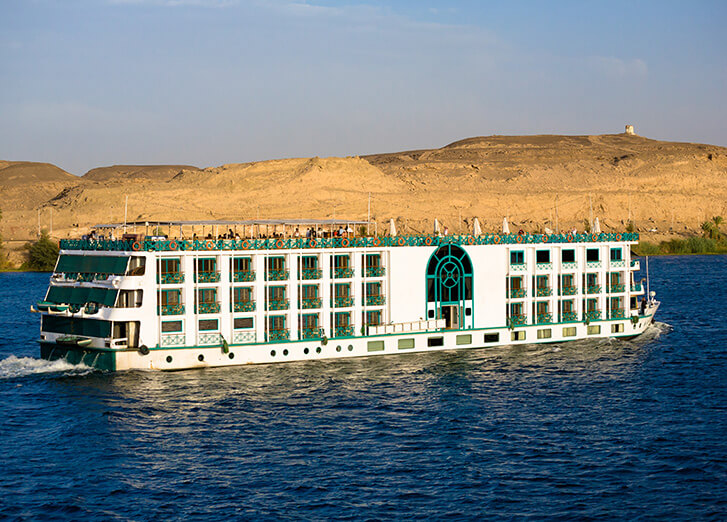 The Nile is the world's longest river, traveling more than 4,000 miles through northeastern Africa and emptying into the Mediterranean Sea at Egypt's coast. Cruises on the Nile are frequently incorporated into longer land-based trips that usually travel round-trip from Cairo. Along the way, guests see some of the country's most treasured antiquities.

Walk through the Luxor Temple, for example, which was built about 3,000 years ago and is especially beautiful when lighted at night. Philae Temple was carefully dismantled during the construction of the Aswan Dam and moved to a nearby island. Four giant stone statues of Ramses II flank the temple at Abu Simbel.

The Valley of the Kings was the final resting place of Egyptian pharaohs, including young king Tutankhamun. You'll see treasures excavated from Tutankhamun's tomb at the Egyptian Museum in Cairo. Other excursions to look forward to include a visit to the Pyramids of Giza and the Sphinx and a sunset cruise in a traditional wooden sailboat called a felucca.

On your cruise, all the day-to-day travel details are handled by experienced tour directors who accompany you during the entire trip. At each stop, sightseeing guides show you the sights and share the history behind them. Cruises are easy to budget, too, as so much is included in one price that you pay up front, including riverboat accommodations, hotel stays, many meals and activities ashore.